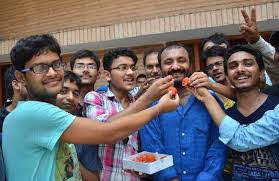 Super 30 is a prestigious Indian educational program started in Patna, India under the banner of Ramanujan School of Mathematics. It was co-founded by Abhayanand, a 1977 batch IPS officer and, Anand Kumar, a maths teacher in the year 2002.

The program claims to select 30 meritorious and talented candidates each year from economically backward sections of society and trains them for the JEE.

In 2002, Abhayanand and Anand Kumar started Super 30 - the idea was to select 30 talented students from economically impoverished sections who could not afford IIT coaching. These 30 students were then prepared to crack IIT-JEE examinations. Anand Kumar's Mother - Jayanti Devi - volunteered to cook for the students while Anand, Abhayanand and other teachers tutored them. The students were also provided study materials and lodging for a year free of cost.

In the 2005 batch, 26 out of 30 students made it to IIT while 28 cleared the examinations in 2006 - this despite the fact that IIT changed the examination pattern. In appreciation of their efforts, Bihar Chief Minister Nitish Kumar felicitated the students with a cash prize of Rupees 50,000 each.

The following year 28 more students achieved the IIT dream and finally in 2008, for the first time all of the Super 30 cleared the IIT JEE. Having achieved perfect result in 2008, Abhayanand quit Super 30 saying "the experiment is over".

Anand's former students also joined as teachers for the Super 30 and in the year 2009, all 30 students again managed to clear the IIT JEE. In 2017, all the candidates again cracked the IIT-JEE Advanced 2017, results of which were announced on June 2017. 26 students of 'Super 30' have achieved success in IIT-JEE Advanced 2018.

Super 30 has been selected in 2010 by Time Magazine in its list - The Best of Asia 2010.
The organization also received praise from United States former President Barack Obama's special envoy Rashad Hussain - who termed it the "best" institute in the country. Newsweek Magazine included Super 30 in its list of four most innovative schools in the world. Anand Kumar has also been awarded the Maulana Abul Kalam Azad Shiksha Puraskar - the highest award in field of education given by Bihar government - in November 2010.

Bollywood Director Vikas Bahl will be casting Hrithik Roshan in his upcoming film titled "Super 30". The film is based on the life and works of Anand Kumar. Media reports have indicated that following the controversy over unsubstantiated results, the makers of the film may change the film from a biopic to fiction, dropping any reference to Anand Kumar or Super 30.