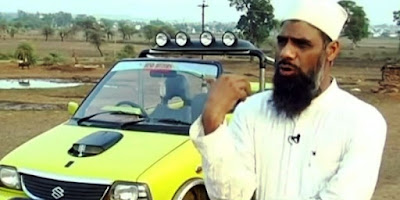 Mohammad Raees Markani from Madhya Pradesh has invented a car that runs on water. This 12th pass took five years to develop the final product. The car runs on acetylene gas, which is formed from a chemical reaction between calcium carbide and water. Raees now has a patent for his water car. According to Mirror, Raees has been modifying an 800 cc engine for the last five years – and now believes he has made the scientific breakthrough. The eco-friendly car uses a mix of water and carbides. Cost per KM is just half only Rs 3/ KM against gasoline Rs 6 / KM.

Raees who has been a mechanic for the last 15 years told Mirror, “The gas is used for several industrial purposes including welding and portable lighting for miners. But in my case, I am using it to propel the car engines . I have made other changes to the engines, which helps the overall performance of the car. So basically, it is just about the water.”

“The market for environmentally friendly cars is getting bigger and automobile companies around the world are looking for eco-friendly ways to reduce pollution. So a car like mine can be a good alternative. It costs close to nothing to operate and it is environment friendly,” added Raees.

The Chinese automobile companies have invited Raees to develop the idea further. All the companies that are interested in Raees’s water car project will have to meet his one condition – any plant to make new cars will be established only in his hometown in Madhya Pradesh. “I want things to change in my hometown. So this is where my work should continue,” Raees stated.