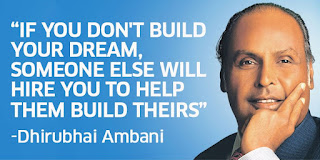 Who doesn't know the name Reliance today? Dhirajlal Hirachand Ambani, better known as Dhirubhai Ambani, is not an unheard name to an Indian. As the founder of India’s largest private firm and second largest publicly traded company in the country, Reliance Industries, Dhirubhai has undoubtedly made enormous capital in his lifetime. But did you know that he started his journey with only INR 1 and while he has created wealth, it not just for him but equally for his thousands of shareholders. Dhirubhai once said, “We cannot change our rulers, but we can change the way they rule us.”  He could do all this just because he could dream, and dream big.

"If you’re born poor it’s not your fault but if you die poor it’s your fault." - Dhirubhai Ambani

Ambani had a humble beginning and he was not from an affluent background. He moved to Yemen at 16 years of age where he worked as a simple clerk with A. Besse & Co. . However, he knew he had to follow his calling and risking everything, after working in Dubai for sometime he later returned to India where he founded the Reliance Commercial Corporation with a meager capital of Rs. 15000. He set up the business in partnership with Champaklal Damani,  though Champaklal Damani differed from Ambani in his views and decided to split  in 1965, Ambani did not give up hope and continued his trade, deciding to even enter the stock market. His stock market dealings and success have often been questioned but the man rose to power through sheer grit and determination. Dhirubhai Ambani is a role model for all youngster's real life inspirations.

He won many awards and accolades during his lifetime. In 2000, he was conferred the 'Man of the Century' award by Chemtech Foundation and Chemical Engineering World for his contribution to the growth and development of the chemical industry in India. In 1998, he was awarded the Dean's Medal by The Wharton School, University of Pennsylvania, for setting an outstanding example of leadership. Dhirubhai Ambani was also named the "Man of 20th Century" by the Federation of Indian Chambers of Commerce and Industry (FICCI).

A visionary by birth, his life has been an inspiration for many and will serve as a beacon light for the generations to come.

"Challenge negative forces with hope, self-confidence and conviction. I believe that ambition and initiative will ultimately triumph." - Dhirubhai Ambani