The person who inspired every countrymen. He always dreamed for a better society and a better nation. He was a great man who changed our country, a great inspiration for the youth like me and a great model for all. 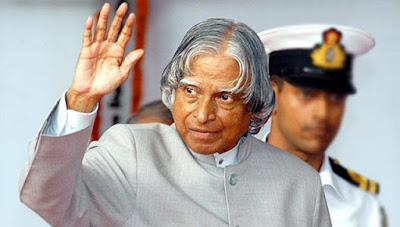 Sir Kalam demonstrated the great potential for dynamism and innovations. Agni, Pritvi, Akash, Trishul and Nag- missiles that have become household names in India and have raised the nation to the level of a missile power of international reckoning. After graduating from Madras Institute of Technology (MIT – Chennai) in 1960, he joined Defence Research and Development Organisation (DRDO) as a scientist. Sir Kalam started his career by designing a small helicopter for the Indian Army, but remained unconvinced with the choice of his job at DRDO. Later Sir Kalam was transferred to the Indian Space Research Organisation (ISRO) where he was the project director of India's first indigenous Satellite Launch Vehicle (SLV-III) which successfully deployed the Rohini satellite near earth's orbit in July 1980. Joining ISRO was one of his biggest achievements in Sir Kalam's life.

Dr. A P J Abdul Kalam's 79th birthday was recognized as World Student's Day by United Nations. He has also received honorary doctorates from 40 universities. The Government of India has honoured him with the Padma Bhushan in 1981 and the Padma Vibhushan in 1990 for his work with ISRO and DRDO and his role as a scientific advisor to the Government. In 1997, Kalam received India's highest civilian honour, the Bharat Ratna, for his immense and valuable contribution to the scientific research and modernization of defence technology in India. In 2005, Switzerland declared 26 May as science day to commemorate Kalam's visit in the country. In 2013, he was the recipient of the Von Braun Award from the National Space Society "to recognize excellence in management of and leadership for a space-related project."

At the same time he helped to create India's awesome weaponry and maintained the rigour of his personal life, working 18 hours a day and practicing veena and loving literature. With the characteristics of modesty, Kalam ascribes the greatness of his achievements to the influence of his teachers and parents. He was a simple and ordinary person who have experience a lot of struggle in his youth and boy hood. He came from a poor background and started working at an early age to supplement his family's income. His dream was to become a pilot and fly high ,but narrowly missed achieving his dream of becoming a fighter pilot, as he placed ninth in qualifiers, and only eight positions were available in the Indian Air Force (IAF).On July 25,2002 he was sworn in as the eleventh president of India and governed India succeeding K.R Narayanan.

Dr Kalam set a target of interacting with 100,000 students during the two years after his resignation from the post of scientific adviser in 1999. He loved to interact with students by saying- "I feel comfortable in the company of young people, particularly high school students. Henceforth, I intend to share with them experiences, helping them to ignite their imagination and preparing them to work for a developed India for which the road map is already available. ''He continued to interact with students during his term as a President and also during his post-presidency period as a visiting professor at Indian Institute of Management Ahmedabad and Indian Institute of Management Indore, Indian Institute of Space Science and Technology Thiruvananthapuram, and a visiting faculty at many other academic and research institutions across India. He is strong supporter of Space based solar power. He continues to take an active interest in other developments in the field of science and technology.

Dr Kalam felt that the biggest problem faced within the youths of our country was the lack of clarity of vision, the lack of direction. The poor children living in obscure place, in an unprivileged social setting may find a little solace in the way his destiny has been shaped and helped them to liberate themselves from the bondage of their illusory backwardness and hopelessness.

About Dr. Kalam’s Journey of life

Kalam was born on 15th October 1931 and raised in Rameswaram, Tamil Nadu, and studied physics and aerospace engineering. He spent the next four decades as a scientist and science administrator, mainly at the Defence Research and Development Organisation (DRDO) and Indian Space Research Organisation (ISRO) and was intimately involved in India's civilian space program and military missile development efforts. He thus came to be known as the Missile Man of India for his work on the development of ballistic missile and launch vehicle technology.

He also played a pivotal organizational, technical, and political role in India's Pokhran-II nuclear tests in 1998, the first since the original nuclear test by India in 1974.

From 'Missile Man' to 'People's President' 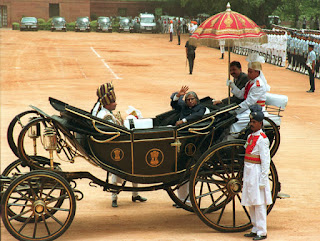 Kalam was elected as the 11th President of India in 2002 with the support of both the ruling Bharatiya Janata Party and the then-opposition Indian National Congress and had served 5 years to the nation. Widely referred to as the "People's President”, he returned to his civilian life of education, writing and public service after a single term. He was a recipient of several prestigious awards, including the Bharat Ratna, India's highest civilian honour. 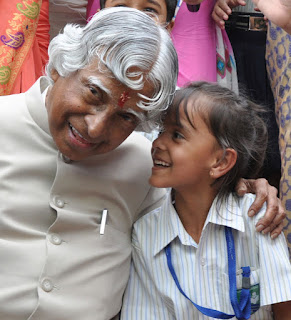 A vegetarian bachelor, Kalam was quoted as saying that like most of the technology he spearheaded, he himself was "Made in India", having never been trained abroad.

Kalam succeeded K R Narayanan and served a full five-year term from 2002 until 2007 after he won the presidential elections which was a highly one-sided contest with Lakshmi Sahgal, a revolutionary of the Indian Independence movement, as his rival. He secured the backing of all political parties.

While delivering a lecture at the Indian Institute of Management Shillong, Kalam collapsed and died from an apparent cardiac arrest on 27 July 2015, aged 83. Thousands including national-level dignitaries attended the funeral ceremony held in his hometown of Rameshwaram, where he was buried with full state honours.