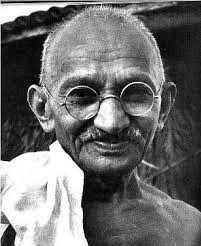 The leader of the Indian independence movement, Gandhi Ji learned a non-violent form of protest while visiting in South Africa that he later developed in the uprisings he lead for India’s independence from British rule.

His style of protest became the model after which Martin Luther King, Jr. styled his protests for civil rights. Gandhi’s simplistic lifestyle and campaigns for the poorest Indian citizens not only endeared him to the people.
Email ThisBlogThis!Share to TwitterShare to FacebookShare to Pinterest
Newer Post Older Post Home