It all began in 1998, when Arunachalam Muruganantham, the son of poor handloom weavers in South India, realized that his wife was using old rags to deal with menstruation because she couldn’t afford sanitary pads. Muruga was shocked. But he also saw a chance to impress her. He decided to produce her sanitary pads himself. At first, it seemed a simple task: he bought a roll of cotton wool and cut it into pieces, the same size as the pads sold in the shops, and then wrapped a thin layer of cotton around it. He presented this homemade prototype pad to his wife and asked her to test it. The feedback she gave him was devastating: his pad was useless and she would rather continue using old rags. 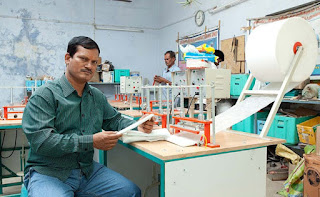 Where did he go wrong? What was the difference between his sanitary pads and those available at the shop? Muruga started experimenting with different materials, but was faced with another problem: he always had to wait a month before his wife could test each new prototype. Muruga needed volunteers and had an idea where he might find them. He asked medical students at a university close to his village. Some of them actually tested his pads but they were too shy to give him detailed feedback. Left with no alternative, he decided to test the sanitary pads himself. He built a uterus using a rubber bladder, filled it with animal blood and fixed it to his hip. A tube led from the artificial uterus to the sanitary pad in his underpants. By pressing the bladder he simulated the menstrual flow.

1 in 5: The number of girls in India who drop out of school due to menstruation.
Unfortunately, he began to smell foul and his clothes were often stained with blood. His neighbors soon noticed this. It was clear to them that Muruga was either ill or perverted. After a while, his wife couldn’t stand the constant gossip. She left him and went to live with her mother.

But Muruga didn’t give up.Muruga was on a mission: to produce low-cost sanitary pads for all the girls and women in his country.

It was two years before he finally found the right material and another four years before he developed a way to process it. The result was an easy-to-use machine for producing low-cost sanitary pads.Imported machines cost over US$500,000. Muruga’s machine, by contrast, is priced at US$950. Muruga’s machine has created jobs for women in rural India. He has started a revolution in his own country, selling 1,300 machines to 27 states, and has recently begun exporting them to developing countries all over the world.

Today he is one of India’s most well-known social entrepreneurs and TIME magazine named him one of the 100 most influential people in the world in 2014.

Several corporations have offered to buy his machine, but he has refused, instead preferring to sell to women’s self-help groups.
Email ThisBlogThis!Share to TwitterShare to FacebookShare to Pinterest 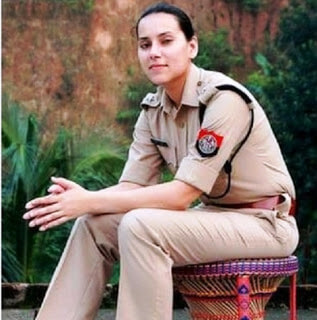 As the entire country fights corruption and terrorism these days, the efforts of many dedicated female police officers have come to light. Known as the Iron Lady of Assam, Sanjukta Parashar is one such IPS officer who is making headlines for her commendable work and bravery.

Sanjukta, who is the first woman to be have been appointed as an IPS officer in Assam, has arrested over 64 militants in the last 15 months and set an example for others.

Even while she was in school, Sanjukta was extremely worried about the increasing corruption and terror in Assam; hence, she decided to stay back in her state and work towards these issues despite getting a good rank. She was first sent to Makum, Assam, in 2008, as an Assistant Commandant. However, soon she was transferred to Udalguri in Assam to manage the communal violence between Bodo and illegal Bangladeshi militants. Within 15 months of conducting her operation, she killed nearly 16 militants and arrested 64 of them.

Mother of a four-year-old, Sanjukta recently started an operation in which she jumped into the field herself with the AK47 rifle. In the past few years, she has dedicated herself completely to the Anti-Bodo Militant Operations.

Many a time, Sanjukta goes to relief camps to be with distressed people who have lost their family or house in militant attacks. She is able to spend time with her husband and family only once in two months. The dedication and courage exhibited by Sanjukta to fight terrorism and corruption is exemplary and respectworthy.
Email ThisBlogThis!Share to TwitterShare to FacebookShare to Pinterest
Newer Posts Older Posts Home
Subscribe to: Posts (Atom)