Colonel Sanders : The Founder of KFC 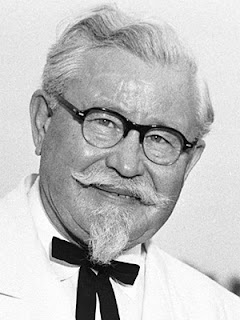 People know him because of his iconic white suit and bow tie. Colonel Sanders was the founder of Kentucky Fried Chicken (KFC). Yet, the zany Sanders got off to a rocky start in life. In fact, it wasn’t until the age of 62 that he set out with a $105 social security check in hand to pitch his chicken recipe to restaurants. 1,009 folks told him he was crazy, but he didn’t give up.

Sanders worked many jobs including fireman, tire salesman, insurance salesman, and of course, a cook. He brewed up his secret chicken recipe between 1939-1940 when he figured out how to pressure fry the chicken in a faster and more consistent product all the time. He was at the age of 50 when that happened.

However, it wasn’t until 1952 that he hit the road and began trying to sell his franchise-model chicken restaurant. The first restaurant that he landed was based out of Salt Lake City, Utah, which became the first Kentucky Fried Chicken. The restaurant tripled its sales within a year where 75% of that revenue was from the colonel’s chicken.

The company grew and expanded faster than he could have ever imagined. In 1964, at the age of 74 years old, Sanders sold the company for $2 million dollars to a group of investors led by Jack C. Massey and John Y. Brown Jr. He retained the rights to the Canadian franchises and stayed on as a salaried goodwill ambassador to the company.

However, this just goes to show you that it doesn’t matter how old you are or just how much money you have to your name in order to accomplish something great.
Email ThisBlogThis!Share to TwitterShare to FacebookShare to Pinterest
Newer Post Older Post Home