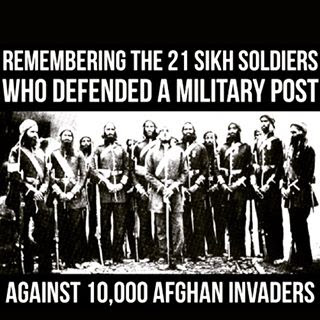 On the Samana Range of the Hindu Kush mountains in Pakistan, the British Army built a small communications post at Saragarhi, to be housed by an equally small contingent of soldiers. The region had always been a troubled area, and during the last quarter of the 19th century, British India’s hold on the North West Frontier was tenuous. In fact, several expeditions had been sent to maintain control and suppress rebellion in the region in the years immediately preceding the Saragarhi battle. 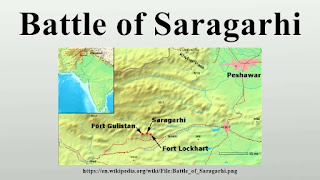 Equipped with a heliograph, Saragarhi transmitted messages by using flashes of sunlight, sent much like telegraphic communication (read: Morse code). The flashes themselves were made by either pivoting a mirror or interrupting a beam of light.

In the summer of 1897, things were getting tense in the region, and the British had only recently ended an uprising of Pashtun tribesmen in the Malakand region (known later as the Siege of Malakand) in early August. By the end of the month, there was a general uprising of Afghans, and by the beginning of September, Pashtuns were actively attempting to capture British Army positions, including attacks on Fort Gulistan on September 3 and September 9.

To combat the Pashtun offenses, troops were sent from Fort Lockhart to reinforce Fort Gulistan, and after the battle on the 9th, on their return trip, a few soldiers were left to reinforce the small detachment at Saragarhi. All of the 21 soldiers remaining at Saragarhi were members of the 36th Sikh Regiment of the British Army, and the contingent was led by Havildar Ishar Singh.

On September 12, 1897, in an effort to prevent any further communications between Forts Lockhart and Gulistan, 10,000 Pashtuns attacked Saragarhi, beginning at about 9 a.m.

Since Saragarhi was a communications post, almost the entire battle was broadcast in real time by its signal man, Sardar Gurmukh Singh, which is why we today know what exactly happened there when 21 faced off against 10,000.

Shortly after the attack began, Gurmukh Singh signaled for aid to Lieutenant Colonel John Haughton at Fort Lockhart, but he was told that immediate help was unavailable. Undeterred, the Sikh soldiers committed to fighting to the last to prevent the encroaching Pashtuns from reaching the other forts.

The first man injured was Bhagwan Singh, and sometime after, the invaders broke part of the wall of the picket. Offers were made to the Sikhs in exchange for surrender, but they were refused. The Sikhs were trying to buy as much time as possible for the other forts to be reinforced, and were willing to pay for that time with their lives. After two unsuccessful attempts at the gates, the Pashtun forces eventually breached the wall. Fierce hand-to-hand fighting ensued.

Shortly before the end, Ishar Singh ordered his men to retreat even further while he remained behind in defense. He, too, fell, during that charge, as did all of the remaining soldiers except for the heliograph operator, Gurmukh Singh. Gurmukh was the last to die, after being burned to death when the Pashtuns set fire to the post. He is reported to have repeatedly yelled until the end, the Sikh battle cry, “Bole So Nihal, Sat Sri Akal,” meaning “Shout aloud in ecstasy! True is the great Timeless One.”

Although no Sikh survived the battle, their sacrifice sufficiently delayed the Pashtuns such that reinforcements were able to arrive at the Pashtuns’ ultimate target, Fort Gulistan, in time to stop its fall.

In addition to the 21 Sikh dead, reports of Pashtun losses range from between 180 and 600, though it’s difficult to discern the true number accurately. That said, it was probably at least 180 as that is what the Pashtuns themselves later reported as their losses in that battle. 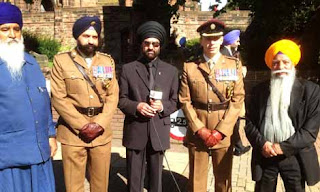 For their sacrifice, each of the Sikh soldiers were awarded the Indian Order of Merit, the highest award for gallantry then given to Indian soldiers by the British.

In addition, Saragarhi Day is celebrated each year on September 12 to commemorate the battle.

Saragarhi, itself, was little more than a small block house and a signaling tower. It was constructed to enable communications between Fort Lockhart and Fort Gulistan, two more significant British posts situated on either side of Saragarhi, albeit several miles apart.