The Heroine Of The Hijack 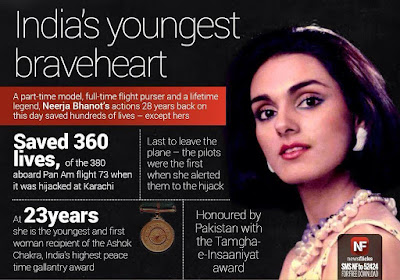 She was a flight attendant for Pan Am, based in Mumbai, India, who was murdered while saving passengers from terrorists on board the hijacked Pan Am Flight 73 on 5 September 1986. Posthumously, she became the youngest recipient of India's highest peacetime military award for bravery, the Ashok Chakra.

Bhanot was the senior flight purser on the ill-fated Pan Am Flight 73, which was hijacked by four heavily armed terrorists after it landed at Karachi at 5 am from Mumbai. PA 73 was en route to Frankfurt and onward to New York City. Bhanot, being the senior-most cabin crew member on board, took charge.

The hijackers were part of the terrorist Abu Nidal Organization and were backed by Libya. The terrorists then instructed Bhanot to collect the passports of all the passengers so that they could identify the Americans. Bhanot and the other attendants under her charge hid the passports of the 41 Americans on board – some under a seat and the rest down a rubbish chute.

After 17 hours, the hijackers opened fire and set off explosives. Bhanot opened the emergency door and helped a number of passengers escape. She could have been the first to jump out when she opened the door but she decided not to and was shot while shielding three children from a hail of bullets. Bhanot was recognized internationally as "the heroine of the hijack" and is the youngest recipient of the Ashok Chakra Award, India's most prestigious gallantry award for bravery during peace time.
Email ThisBlogThis!Share to TwitterShare to FacebookShare to Pinterest
Newer Post Older Post Home