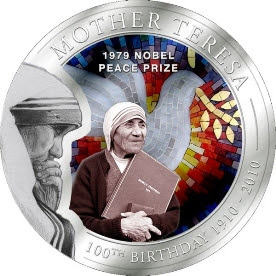 Mother Teresa joined a group of missionary nuns working in India, where she took her vows of a nun.

From childhood, she felt the call of God and the desire to help others. In India, she started a school for the poorest children. In 1950, she started her own religious order, The Missions of Charity," specifically to care for the people that no one else wanted to look after. She devoted her entire life to the poorest citizens, earning numerous awards throughout her lifetime–including the Pope John XXIII Peace Prize in 1971 and the Nehru Prize in 1972.
Email ThisBlogThis!Share to TwitterShare to FacebookShare to Pinterest
Newer Post Older Post Home